Are your cranes compliant?

When it comes to crane maintenance and inspection there are a few basics. A hierarchy exists on what standard of Inspection and Maintenance you have to adhere to;

There are some caveats to the above. If the OEM’s maintenance manual says “Ensure you inspect the crane” and that’s it, then the Australian standard must be adhered to. This is easily understood when looking at the flowchart provided in AS 2550.1-2011 Cranes, hoists and winches – Safe use – General requirements. 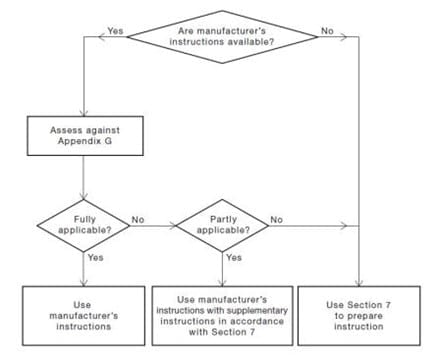 AS2550.1 Figure 7.1 – Applicability of Maintenance and Inspection Flow Chart

Pre-start Inspections are just that. An Inspection of the Crane before you start using it to make sure it is safe to be operated. Small accidents that seemed harmless yesterday or even a build up of dust and grime in the wrong spot can quickly lead to catastrophic failure of a component or the whole machine.

Pre-Operational inspections are often just ticked and flicked. Or ignored completely. While this may seem OK when you’re using the equipment everyday, it creates a bad habit of being lazy in all inspections.

A good example of this happened to a mobile crane in July 2014, showing the importance of carrying out pre-start inspections. (Excerpt below from the Department Mines and Petroleum (DMP) Significant Incident Report No. 237)

In July 2014, a mobile crane at a mine site was being used to unload a truck. After a daily pre-start inspection, the crane took the weight and lifted the load. As the crane started to slew, the nylon head sheave (rooster sheave) weighing about two kilograms, catastrophically failed. Part of the sheave fell around 10 metres to the ground, narrowly missing a rigger working in the exclusion zone below. When the sheave was inspected later, it appeared to have been damaged prior to the lift. The weight of the load was within the crane’s safe limit. There was no side loading to the boom head
sheave during the lift. The sheave was an original equipment manufacturer (OEM) supplied part.

Damage to nylon head sheave. Right. Half of the failed sheave for the auxiliary hook remained in place. Left. Sheave sections recovered after the incident. (Originally published in DMP Incident Report No. 237)

Routine Inspection is a more in depth Inspection focusing on general wear and tear components.

Components that have recently been replaced or repaired are also highlighted for inspection. This involves removing covers and digging a bit deeper into the working areas of your crane. Some of the checks include but are not limited to functional tests of operating systems, lubrication of moving parts, signage, electrical system, visual inspection and measurement as necessary of brakes, gears fasteners and wire ropes. 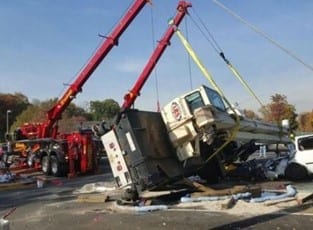 Brakes are not directly involved in a lift and can sometimes be forgotten. In mobile cranes especially this can lead to tragic accidents such as this brake failure in Oradell, New Jersey. The Crane operator realised he had no brakes and took emergency evasive maneuvers to avoid a reservoir on one side and power lines on another. A sharp turn ended in the Crane tipping over onto parked cars which were luckily unoccupied.

As in most cases, the Australian Standard is common sense based. Depending on the use and condition of the crane, routine inspections may be completed at a lower frequency than recommended by the standard. To do this the Crane must be Inspected and evaluated by a competent person who then puts forward that recommendation. This is usually the case where a Crane is lifting significantly lower loads than designed and loading of the Crane is very infrequent.

Third-Party Inspections is basically an un-biased check to see if your Crane Inspection & Maintenance program and records comply with the OEM instructions and Australian Standards. During a Third-Party Inspection all items that would be checked during Routine & Annual Inspections are assessed including all maintenance items. As a brief overview the inspection should include checks of safety and function of the Electrical, Mechanical and Structural systems.

The frequency of Third-Party Inspections depends on the use of the Crane and the Competent Person’s recommendations. Table F1 of Appendix F in AS2550.1 provides guidance on the minimum requirements for frequency of inspections.

Major Crane Inspections are to assess the suitability for continued safe operation. As the name suggests this is again a much more in depth Inspection. All critical components will be stripped down and cleaned of grease where required for a very thorough Inspection. All nominated critical areas will not only be Inspected but also Non Destructively Tested (NDT). This is to determine if the loading over the Crane’s life has created areas of fatigue stress which may result in cracking. One such critical area is the Boom on an extendable boom Crane.
While no investigation findings were available at the time of publishing, the catastrophic failure of the boom pictured below is indicative of what a fatigue crack in the boom structure could do. This incident occurred while lifting a church steeple in Milton, Nova Scotia, Canada. 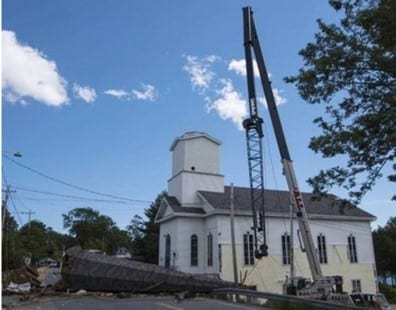 On top of the usual findings, the Major Inspection report details what components need to be closely inspected in subsequent periodic inspections as well as any particular maintenance which is required for continued safe operation. It is also stated in the Australian Standard that persons carrying out these inspections are supervised by a Professional Engineer.

Major Inspections are at a minimum every 7 years or two thirds of the OEMs stated design life.

There is another calculation for when a Major Inspection is due which takes into consideration the design life, design loading and actual loading of the Crane in operation. This calculation is in AS2550.2 Section 9.

“The Goldfields Land & Sea Council (GLSC) Aboriginal Ranger program has partnered with Rapallo on a variety of environmental projects for mining proponents. Rapallo has a demonstrated understanding of the complex cultural dynamic of the Aboriginal community and has provided excellent project management and professional guidance to the Rangers, whilst also building in opportunities for shared learning. We look forward to developing this foundation as we expand on the services that Aboriginal Rangers can provide to the region into the future.”

“Rapallo is a team of dedicated people. Very professional and responsive to changes and meeting tight deadlines.”

"They have always supplied skilled and motivated labour hire personnel that fit in with our business. I would have no hesitation in engaging Rapallo on future projects and would highly recommend their services.”

“Keep up the good service and we will continue to utilize the company. I am now utilising Rapallo for all my sentry requirements onsite at BHPB NKC from now on. I will also be looking at utilizing more trades and other services at our site in the future if the situation arises.”

“We choose Rapallo to conduct  our statutory classified plant inspection because of their professional  service and engineering backup.  Not only does Rapallo provide a timely and thorough inspection service, they can back up their recommendations with engineering solutions .  All my interactions with Rapallo have been timely, professional  and solutions driven.  It is a pleasure to have Rapallo as our classified plant inspection vendor and I highly recommend their services.”